Firefighter Davis had just responded to a fire at his brother’s barn. He collapsed while pulling the rope to draw Atlantic’s fire truck. Davis worked for many years in Port Washington as a butcher. 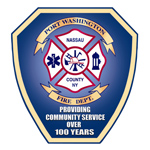